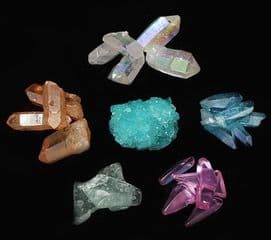 Enhanced Crystals What Are They?

There are a range of enhanced crystals available today. Enhanced crystals include those that are laboratory grown and certain natural crystals that have been treated with various minerals to change their appearance.

Feelings are mixed as to whether enhancing crystals is beneficial or not. Laboratory grown crystals are “natural” in their growth formation but have been given a helping hand, and will possess their own unique energies. The same is true for those natural crystals that have had metals and other minerals bonded to their surface, such as the various Aura Quartz.

Other enhanced crystals include those that have been heat treated to change the colour of the original crystal, irradiated to deepen the colours or have had coloured dyes added to either increase their intensity and visual appeal or to create brightly coloured stones.

Whatever you may personally feel about the subject, many enhanced crystals will have specific individual energetic vibrations and thus have a part to play in energetic, vibrational healing. Brightly coloured enhanced crystals and gemstones such as Agate and Howlite will have a part to play in colour therapy whilst retaining the energy of the original crystal.

Below are a number of enhanced crystals that are available today, listed in alphabetical order according to their popular names.

Aqua Lemuria – Blue/Green glassy amorphous material similar in composition to Obsidians and Tektites from a mountainous region in Sumatra, possibly enhanced by the ancient Lemurian race of man

I
Imperial Gold Aura Quartz aka Tangerine Aura Quartz – Clear Quartz that has been treated with vaporised Iron, Titanium and trace minerals

Smokey Aura Quartz aka Champagne Aura Quartz – Clear Quartz that has been treated with vaporised Gold, Indium and trace minerals