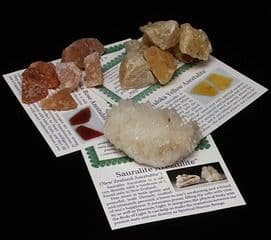 Trademarked crystals are accompanied by a descriptive “Certificate of Authenticity” which guarantees that the buyer has purchased that specifically named crystal.

Below is a list of many of the Trademarked Crystals with a brief description as to their more widely known crystal name and country of origin, if known. They are listed in alphabetical order according to their trademarked name. I will add link to my website as soon as I manage to source them.

Many of these crystals can be found in Robbert Simmons books.

Angelinite – White Quartz, and other minerals from Vermont USA

B
Black Azeztulite – Quartz and Black Calcite from Vermont USA

G
Genesis Jasper – Hematite, Magnetite and Jasper from desert areas in the west of USA

Healers Gold – Combination of Magnetite and Pyrite from USA

I
Inkalite – Quartz with inclusions of Chlorite, Agate or Amethyst from Peru